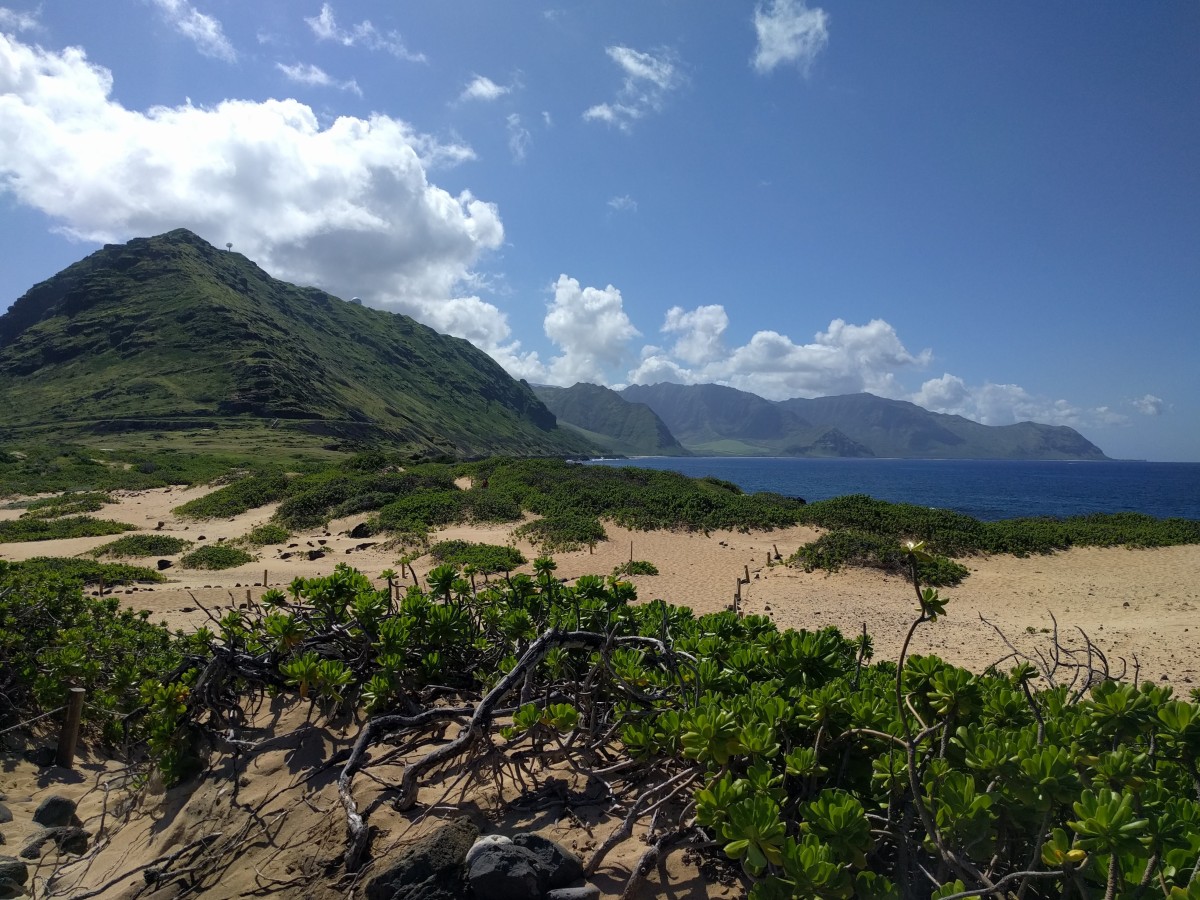 Not a cloud in the sky–an auspicious phrase, unless you’re hiking Ka’ena Point Trail with 25 pounds strapped to your back.

Then it’s more of a death sentence, though there’s hardly a better way to go!

With our trip a month away, we’ve been hiking twice a week and had planned Ka’ena as a long backpacking training run with our friends this past weekend. Only an hour’s drive from the hustle and bustle of Honolulu, Ka’ena marks Oahu’s westernmost point as well as the end of the road–literally! Spanning the western shore of the island in almost its entirety, Farrington Highway comes to an abrupt halt at Ka’ena Point Trailhead. There’s simply no seeing this hidden part of Oahu unless you’re willing to hoof it, and believe you me: this is a trail you want to hoof.

Between November and May, the sun-baked Waianae coast blooms to life in lush shades of tropical green. Warm waters welcome migrating giants, and on a clear day–which is next to always at Ka’ena–humpback whale sightings can clock in an easy dime a dozen in under an hour. Endangered Hawaiian monk seals sun themselves on sandy beaches while Laysan albatrosses circle the shore, their majestic 7-foot wingspans casting shadows across sand dunes and lava cliffs.

But Ka’ena is also a land of extremes.

Literally “The Heat,” Ka’ena will make you cry uncle under its scorching midday sun. Heed the posted warnings; Ka’ena is aptly named indeed. You can access Ka’ena Point from both Waianae and Mokuleia, though from Mokuleia, the trail measures a hair longer at just over 5 miles roundtrip. We opted to hike the Mokuleia route as it offers more solitude than its Waianae counterpart; it’s also only 2 miles away from Dillingham Airfield, a safer parking alternative to trailhead parking with convenient public restroom access. While safe and free, parking at Dillingham Airfield added an additional 4.5 miles to our hike, bumping our total to a sweaty but satisfying 9.5 miles.

Our group set out from Dillingham Airfield at 8 am, each hiker laden with 5 liters of water, gear, and a bottle of electrolyte drink. With the sun low on the horizon, temperatures hovered at a bearable 80 degrees, though the day was already shaping up to be much more humid than we would have liked. We followed the highway for two miles, grateful that the paved road made for speedy hiking. We arrived at the trailhead gate a half hour later–a little sweatier under our floppy sun hats, but ready for whatever Ka’ena had to throw our way.

Beyond the gate, hikers must share the trail with any off-road vehicles brave enough to pit their tires against the heavily cratered red dirt and rock “road.” Not to worry, though–there’s no real chance of getting hit. Driving more than 5 miles per hour would be ill-advised here unless flat tires are the desired goal! Still, it’s good to be aware of the possibility of vehicles and plan accordingly. Countless spur trails beckon hikers to the ocean, and though we managed to resist this go-round, their allure is hard to ignore. We’ve been lucky to spot monk seals on hidden beaches and majestic honu (green sea turtles) just offshore in the past. The main trail, in contrast, is decidedly less comely, all red dirt and rocks for miles on end, but I’d argue that its meditative predictability is precisely Ka’ena’s charm.

To hike Ka’ena Point is to embrace the journey over the destination, and we were fortunate to be treated to some of the best scenery I’ve ever experienced in these parts. Recent rainfall left the Waianae Mountains greener than I can remember, and the sky and ocean melded into a seamless sea of blue. All of that blue, though, translated to little cloud cover for shade, and temps soon spiked at a sweltering 90+ degrees–a sticky, unforgiving heat that left us losing water faster than we could replace it. We slowed our stride to allow our bodies a chance to cool.

At the 5 mile mark, we came upon a cacti and sisal “forest” that preceded our turnaround point–Ka’ena Natural Area Reserve, a wildlife sanctuary established to protect nesting wedge-tailed shearwaters and Laysan albatrosses. Cordoned-off footpaths meander the birds’ burrows, allowing visitors an up-close view of these large and fascinating seabirds. Unfortunately, we arrived at the tail end of nesting/migration season, so stragglers numbered few and far between. During the winter, however, visitors may see hundreds of nesting albatrosses circling and diving for fish–quite the spectacular sight! Equally impressive is the expansive and rugged relief of the Waianae mountains to the south of Ka’ena point, hidden from view until you reach the lighthouse. In a sprawling metropolis like Honolulu, I’m thankful that there are still pockets of untamed wilderness like this to be found–miles upon miles of unsullied blue and green, the way Hawaii was meant to be.

Cactus and sisal “forest” in the distance 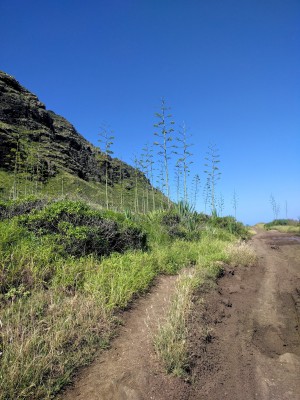 Summer will soon be here, but for now, this hillside is lush as ever

Tempting as it was to linger under the shade of the lighthouse tower, it was already 10:30 am. The 90 degree high we’d noted earlier would rise within minutes as temperatures continued to climb. We hoisted our packs–a few pounds lighter now thanks to some serious water guzzling during our break–and headed back to the trailhead. Scorched arms and sweat-drenched shirts hastened our pace. In spite of slathering SPF 50 on every square inch of skin just two hours earlier, it was clear we were beginning to resemble broiled lobster. The time for admiring views had passed; we needed to get out of the sun and quick.

It was such a relief to reach the trailhead! Free of the Ka’ena inferno, sea breezes made for tolerable temps. But out of the frying pan and into the fire, as they say: where ocean breezes offered blessed relief, our achy feet were definitely worse for wear. Though not our first training hike, this was the heaviest weight we’d practiced with this month. Coupled with the 11 am heat, my feet were suffering Honolulu Marathon flashbacks (for reference, a one-and-done stint). 😉

Conversation took a back seat the last two miles, each of us digging deep to gather some inner resolve for the final push. Food fantasies have always done the trick in this past, and thankfully, this time was no exception. ‘AC and plate lunch’ became the mantra that got us back to the car, and boy, did Loco Moco Drive-Inn ever deliver! With an abundance of AC, good friends, and good eats, mochiko chicken plate lunch* never tasted as delicious as it did that day. Come for the hike and stay for the food–Ka’ena Point will leave you hooked.

*Local-style “plate lunch” is comfort food in Hawaii. 2 scoops of rice, a scoop of macaroni salad, and some type of gravy-covered or Asian BBQ meat is standard plate lunch fare. Smothered-in-brown-gravy-or-soy-sauce is a popular option, though many places (like Loco Moco Drive Inn) now offer low-carb plates, substituting tossed salad for the rice and mayo-heavy macaroni salad. My favorite option of all is the mini plate lunch–with 1 scoop of rice, 1 scoop of macaroni salad, and half the meat of a regular plate, it’s just decadent enough to sate hiker hunger and feel like a treat!

Aloha and thanks for stopping by! We are a roadtripping, backpacking family of five. Minimal funds, maximum fun.