Locals might poke fun at the stereotypical Hawaii tourist fantasy of grass skirts, coconut bras, and hula-dancing maidens bearing flower lei at luaus, but really, we’re no different when it comes to the Mainland. The truth is Hawaii folk harbor some pretty quirky fantasies about the Lower 48, too. We obsess over IKEA and Trader Joe’s and how many jars of cookie butter we can smuggle home in our suitcases. We yearn for snow days and wood-burning fireplaces. Fantasize about RVs and cross-country road trips. Also, squirrels and raccoons are the most amazing wildlife ever–and no, I’m not even close to kidding.

When I was a kid, there was this commercial that aired between Underdog and the Flintstones. It featured Kalani, a local boy whose family owned property in Montana. Kalani had his very own babbling brook to splash in and an endless backyard of pine forest for horseback riding. He urged Hawaii kids to sell their parents on the merits of beautiful Ponderosa Pines. Come visit me, Kalani, and we can go to Yellowstone anytime we want! I begged my parents daily to move to Ponderosa Pines. Sure, I was only five, but I knew what I wanted, and what I wanted was that. I was sold on the dream.

Fast forward a few decades, and after one fun/exhausting/expensive-as-heck trip to SeaWorld, Universal Studios, Legoland, and Disneyland in 2011 (don’t get me wrong; I love all things Disney!), I recalled those childhood fantasies of RVs, road trips, and Ponderosa Pines. Thus was born the annual family road trip and the dream to see our nation’s parks. To be sure, our road trips looked a lot different in 2013. There were afternoon naps and potty breaks for our preschooler. Motel beds. Restaurant meals twice a day. Hikes were under 2 miles, and parks were sprinkled in almost as an afterthought between museum visits and city activities. Given the chance to go back though, I wouldn’t change a thing. These baby-steps laid the foundation for our appreciation of the size and grandeur of our nation, and perhaps more significantly, the kids’ love for our National Parks and the outdoors.

Road Trip 2013 began with a 5.5 hour flight to Oakland, CA . Flying with an antsy four-year-old was…well, challenging, but we touched down intact just after 11 pm. It was no less challenging to convince said four-year-old that what his little body perceived as 8 pm Hawaii time was in fact very, very late in California time. Between our excitement and the time change, no one slept much, but the troops rallied to hit the ground running early the next morning. Our first stop: San Francisco!

Part of my road trip/Ponderosa Pines fueled fantasies included hanging off a cable car Doris Day-style, so we parked at the Embarcadero and hurried to the cable car turnaround on Powell and Market. There was already quite a line brewing at 7:30 am, but in no time at all, we boarded a Powell and Hyde car and were off to the races–and I mean that literally, because man, those cable cars move fast! The scaredy cat in me reconsidered the hanging from the rails/certain death plan and settled for outward facing seats instead.

Our next stop was Fisherman’s Wharf for a Golden Gate Bay Cruise. Prior to our trip, I’d found a 50% off Groupon for Red and White Fleet tours and purchased 10 am tickets to circle Alcatraz Island and sail under the world-famous bridge. Given another chance, we’d probably tack on a day tour of Alcatraz as well, but we loved our boat ride nonetheless. Free audio tours sharpened our bearings and helped us pinpoint historic San Francisco landmarks. Being on the water turned out to be a fun way to experience San Francisco with young kids.

Once back at the wharf, we set about to the important business of filling our bellies. And to those of us with Lower 48 fantasies, nothing says San Francisco like Boudin sourdough bread bowls brimming with steaming clam chowder. To this day, I’m unconvinced there’s anything more satisfying than tearing into piping hot sourdough to sop up ladlefuls of creamy clam chowder.

Our post-lunch walk along Fisherman’s Wharf from Pier 39 to the Exploratorium measured in at a mile, but with a preschooler in tow, that mile felt more like five. Poor guy; with little sleep, a new time zone, and no nap on the horizon, a mile was a lot to ask. We arrived at the Exploratorium on foot in just over an hour–a little worse for wear but without any major meltdowns.

The Exploratorium offers interactive exhibits and multiple explorations in science, art, and human perception. It’s an eclectic mix, falling somewhere between art gallery and science museum with a dash of Brain Games to boot. All I know is we could’ve easily spent the entire day here once we got to playing. The kids loved the interactive physics games and especially enjoyed the Out Quiet Yourself exhibit, a scientific and meditative exercise in walking as quietly as possible across a gravel path against a sound meter. 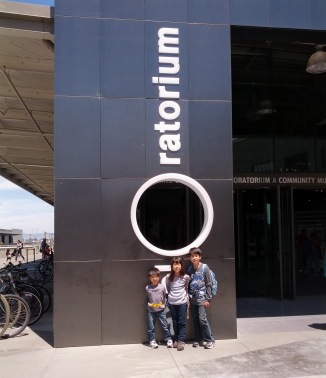 She loved this experiment

After five hours at the Exploratorium, we shifted into low gear (literally) to drive down Lombard Street, aka the Crookedest Street in the World. Just as we hit the top of Lombard, though, I glanced back to find all three kids fast asleep. The hubby and I enjoyed the twisty descent alone, letting the kids catch a few well-earned Zs.

Even though I’m fairly sure we consumed our body weight in sourdough and clam chowder earlier that morning, we still managed to put away a golden batch of fish and chips at The Codmother Fish and Chips, an authentic joint run by a lovely British woman with a penchant for deep-fried and delicious. It’s been years since I’ve visited the UK, but this stuff was at least as good as real-deal London fare minus the newspaper cone. We wholeheartedly recommend it!

Not quite ready to head back to Oakland just yet, we splurged on dinner at Alioto’s on Fisherman’s Wharf. Critic reviews may be mixed, but for us, Alioto’s was the perfect mix of charming ambiance, sunset views, and iconic location. And what’s more iconically Fisherman’s Wharf than steaming bowls of spicy, brothy crab cioppino? Watching the sun sink below the horizon, we savored our seafood, thankful for the experience. A short trek over the Bay Bridge took us back to Days Inn, Oakland for the night.

Complete with an historic carousel and sand slides for cardboard racing, Koret Children’s Quarter in Golden Gate Park turned out to be an unexpected trip highlight for us! To this day, the kids reminisce about the cardboard slides and intricate rope towers they monkeyed around on. Our resident birder (aka the oldest) spotted his first hummingbird, and we loved the novelty of finding Queen Wilhelmina’s Tulip Garden and neighboring Bison Paddock smack-dab in the middle of the city. If these features sound completely incongruous, it’s because they are–with good reason: Golden Gate Park is HUGE. We’re talking multiple museums, windmills, and bison paddock huge. So when we decided to visit onsite California Academy of Sciences for our youngest, whose only road trip request was to see dinosaur fossils, we figured it might take as long as 15-20 minutes to circle the block. Did I mention it was Free Museum Admission Sunday?

I hear you laughing at our delusion.

After two hours navigating gridlock and the assembled hordes, we finally managed to park and snake our way into the 5-city-block-long line. No exaggeration, we couldn’t even see the museum from where we stood! Still, the line moved quickly, and we were grateful to gain (free!) entrance within an hour. Sadly, a docent informed us that the Academy’s paleontology collection had moved and that their only remaining fossil was the T-Rex displayed in the lobby. Lucky for us, long-term focus was not our 4-year-old’s strong suit, and he was soon enamored of the earthquake simulator and indoor rainforest. We would’ve loved to spend more time at CAS, but it was 2 pm, and we had a 3 hour drive to Fort Bragg ahead of us.

We nixed Point Reyes National Seashore from the itinerary for lack of time (though we will be stopping here to backpack this summer!), tracing Highway 1 to the exclusive coastal city of Mendocino instead. It’s not difficult to understand Mendocino’s appeal: here, wind-ravaged cliffs fall precipitously to the tempestuous Pacific; inland, bucolic hills roll gently toward redwood havens. It’s the kind of drop-dead gorgeous that beckons you like Siren song. It’s no wonder we couldn’t resist succumbing to an off-itinerary hike to Point Cabrillo Lighthouse in pursuit of the bewitching Golden Hour.

There are few things in life I consider magical, but this Point Cabrillo Lighthouse hike made me believe: golden light low on the horizon, crashing waves against lonely, jagged cliffs, a sweet doe that appeared out of the brush to hold our gaze a long moment. With the lighthouse keeper’s lamp aglow in the distance and wildflowers amid tall grasses as far as the eye could see, it was almost as if we’d stepped into a scene from a Thomas Kinkade painting. The dirt was soft, the hiking was easy, and though we never found the actual trail to the lighthouse, we weren’t lost. We were exactly where I’d always hoped we’d be–out there, chasing the dream.

Aloha and thanks for stopping by! We are a roadtripping, backpacking family of five. Minimal funds, maximum fun.